We arrived to Savaii Island by ferry and were totally captivated by the surroundings within a few seconds. The sea was even bluer, the sand was even whiter, the fish in the sea even more colourful and the locals even warmer. Samoa is a real tropical paradise with all the trimmings as you can imagine it from travel agencies’ pictures. That place with coconut palm trees really exists!!! 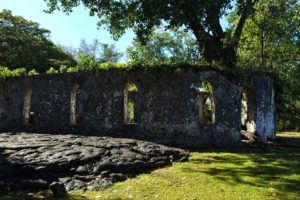 It was six of us, we didn’t know each other before and yet we decided to rent a minibus together to share the expenses and all the great experiences ahead us. We had the best holiday in our lives. Our first stop was the Saleaula village where we could see the ruins of the Christian church flooded by lava. Later on we decided to spend our first night wildly on the beach. We asked the owners of the beach for permission and paid 5 tala (about 3 NZD) to sleep on their property. We collected coconuts, enjoyed their super sweet taste and decided to set up a fire without a lighter. Romantic as…

Local kids were watching us during our fire-setting attempts and slowly coming closer and closer. After half an hour of our fruitless efforts a cute little girls came to use with a lighter in her hand and amused eyes on her face: “Why don’t you use that?” We really had to set up a fire with a lighter in the end and were disappointed with our survivor abilities. We wouldn’t last long in wild nature. Then we laid down on the sand around the fire and thought how great we were going to sleep. There was just one thing we didn’t think of – the crabs. 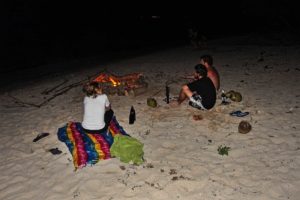 With the dusk settling over the ocean they’d started to climb out their shelters and run around the beach. They were huge, bigger than two hands and we naively hoped that the light and heat of the fire will keep them far from us. However, when a huge crab climbed on Michal’s back and tweaked him hardly, some of us (including me) hid cowardly in the car. What a surprise – there were huge ugly cockroaches in the car instead. And when I say huge I mean really huge.J It was a Sophie’s choice but I’d decided to sleep in the car. Actually I didn’t sleep at all, I was up all night wrapped in all the clothes I had and waiting for the cockroach to crawl into my mouth.

We lost our courage, gave up on sleeping on the beach and found a cosy accommodation in Regina beach fales. This place was absolutely perfect so we spent another night here on our way back. The beach was stunning, the sea was crystal clear, the coral atolls were full of colourful fish. I know this sounds like Samoan average but imagine all I was talking about before – just even more beautiful. Sleeping in beach fales is in my opinion thebest accommodation you can get on your vacation. You sleep right on the beach, you fall asleep with the sounds of the ocean and you are woken up by the sunrise. There is just a wicker roof, walls made from dried palm leaves and a mattress on the wooden floor. But believe me, you don’t need anything else. 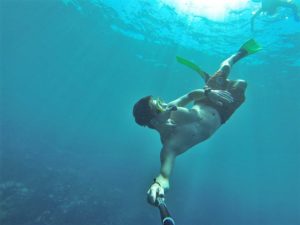 One of the highlights of our Savaii trip was definitely a snorkelling experience operated by a small local company Dive Savaii. Small boat took us further in the ocean and we had a chance to dive and swim among the corals and observe schools of fish. On top of that we found Nemo – small orange fish with white stripes, that is accurately called ocellaris clownfish. The greatest moment came when we spotted huge majestic sea turtles. We were lucky enough to observe and follow them in the open ocean for several minutes. Such a beauty…

We spent the rest of our holiday doing amazing stuff like that and the time you flu.

There was the last day of our holiday ahead us. Watching the sunset we were sitting on the wharf and talking nostalgically about all the adventures and fun we had together. We had no idea that the craziest experience was coming yet. There was a bunch of young locals wandering around the wharf and one guy called Chris, who worked in the nearby hotel, started to talk to us. He invited us to a famous dance club in the nearby village. We definitely couldn’t miss this cultural experience. Chris got a taxi to pick us up in front of the hotel.

From outside you can imagine the Samoan dance club like any average dance club in a village. The bigger was our surprise when we entered in. The first suspicious fact was that almost no women were inside. I asked Chris, where are all the girls hiding. “At home. 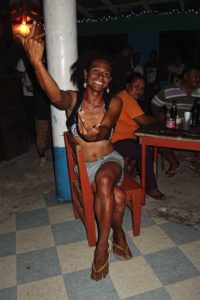 We don’t need them here,” answered Chris simply and I suddenly realized why. At least half of the men was dressed like women and the rest of them, including Chris, were most likely gays. They were dancing together and they definitely didn’t miss any females. We could hardly believe our eyes. Samoa is very religious Christian country. People here can really get offended just because you are not married and you are sleeping with the opposite sex in the same room. Than we saw this “sodomy” right in front of our eyes. How is that possible? Later on we learned that there is a certain tradition in Samoa to raise any third son as a daughter. He is even dressed like a girls and helps his mum with cooking and other housework. This phenomenon is called Fa’afafine in Samoan language and it means something like a third gender.

For some reason there are more boys than girls to be born in Samoa, so this phenomenon is actually quite common here. Even though I could usually feel bit uncomfortably being a white blonde girl, no one had noticed me at all. Our boys were in the immediate danger instead. They felt a bit awkward, stood shyly in the corner and were refusing dance offers. Sim, Lucy and I on the other hand felt great. We could dance in the middle of the dance floor having our own space. 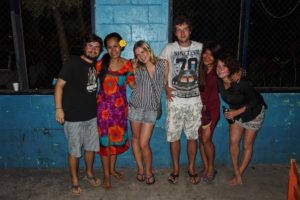 However, after few sips of some Samoan spirit even our boys dared to dance with us and we enjoyed the whole evening together. What I “enjoyed” the most was our ferry journey back to Upolu the other morning. The combination of rough ocean and poor-quality alcohol made me sick from my stomach and I spent most of the time very close to restroom. A beautiful and majestic orca appeared suddenly and swam alongside our ferry for few kilometres. My nausea was instantly forgotten and I was enjoying our last few moments in Samoa. When the Air New Zealand plane landed back in Auckland, I felt this mixed feeling of sadness and joy. This was definitely not my last time in Samoa. 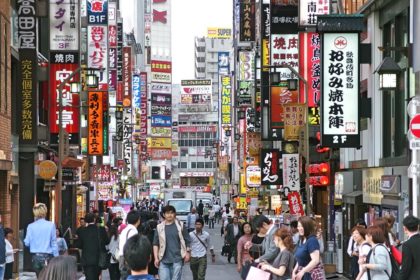 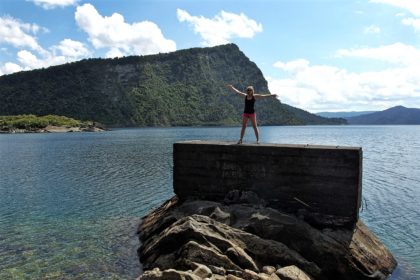 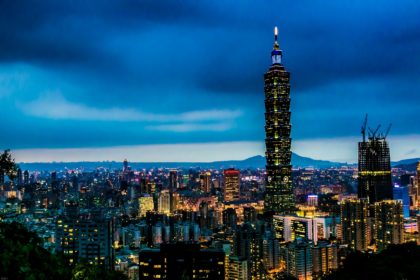