There is a bit of nostalgia in today’s post as we visited Coromandel peninsula and Tauranga in the summer of 2015. At that time, we were in a fairly decent climbing form and decided to follow the instructions in our climbing guide and explore a hidden gem few kilometers from Rotorua – the Mangorewa Rock. It was quite a stumper to find it. For several minutes we were forcing our way through the bushes along the road before we finally found the right path. It took us another 30 minutes of wading in the stream and jumping from one slippery stone to another. Then the majestic reddish rock wall appeared in front of us.

We spent the whole morning on the rock and went back on the journey in the afternoon. We couldn’t have missed another beautiful waterfall which name I don’t even remember as you can see some gorgeous waterfall on every twentieth kilometer in New Zealand. And then, the famous Coromandel peninsula, the favorite weekend spot of all Aucklanders, emerged on the horizon.

The peninsula has 40 km at its widest point. Under good weather condition, it can be visible from Auckland which lies 55 km on the west.  Coromandel is largely covered by a subtropical forest and the terrain is hilly, full of steep slopes and serpentines. Driving the car can become a nauseous experience for all individuals with a weak stomach. Yes, I’m talking about myself. There are only a few towns that have more than 1,000 inhabitants. The biggest town is Thames with the population of 5,000. It might seem like a paradise for independent travelers. Unfortunately, the lower is the population the more tourists come to visit.

Our first stop on Coromandel was the Mangorewa Kaharoa Gorge. It is an old gold mining area where you can see remnants of historical mining facilities and buildings and explore abandoned mining shafts.  During the gold rush in the first half of the 20th century, many people from Australia and the United Kingdom moved here to work in the gold mining industry.

How lucky we were in Whangamata. We arrived in this town right in time for the Rock ‘n’ roll festival. Hundreds of American muscle cars and other veterans from all over New Zealand and Australia were parading through the town. Kiwis are well-known for their passion for these cars, so you can bet it was something!

As much as we enjoyed the festival we were seeking a moment of solitude and found beautiful Opoutere Beach. We collected live mussels on the beach and cooked them on our camping stove. “Royal feast!” we were shouting while the sand gritted between our teeth. A glass of our favorite cask wine put us into a sleeping mode and we decided to stay overnight. However, we were awakened by an unpleasant knock on our window around 7:00 am. Our hazy car windows revealed our shelter and we got a $200 fine from the DOC ranger for illegal camping. Stay only in an official campsite on Coromandel. Rangers are very strict there.

Another stop we couldn’t have missed – the famous Cathedral Cove. A bay with a magnificent rock formation that has become a symbol of Coromandel. Playful wild waves were hitting the beach and warm weather lured us to spend the afternoon swimming.

Talking about Coromandel dominants, there is another so-called “must see place” – the Hot Water Beach. Beach in Mercury bay which was named after the underground hot springs.

They are emerging through the sand to the surface. Two hours before and after the low tide, the beach becomes a popular tourist attraction. Visitors dig pools in the sand and the pools get filled with the hot underground water (up to 64°C). Hot sand also heats up the sea water flowing in the waves. We didn’t have a great luck with this beach. The waves were too harsh that day and even during the low tide, they were hitting the beach too strongly. All our attempts to build a pool were unsuccessful. The beach was overcrowded; it was hard to move there. One big disappointment. Avoid the tourist places and go on the Pinnacles track instead. You can enjoy beautiful views in a rocky valley and you won’t have to fight with hundreds of people.

Coromandel can be a magical place. Ideally, choose an off-season time for your visit. Otherwise, a subtropical dream can turn into a tourist nightmare. 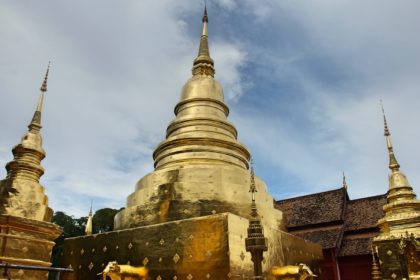 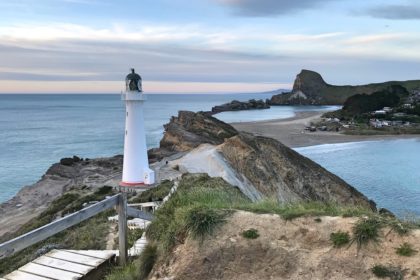 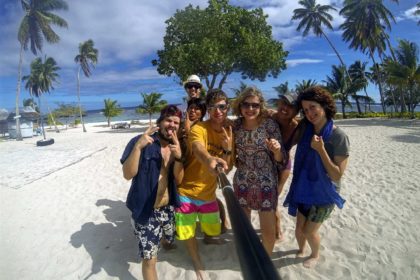